The 2019 Ford Ranger might be small in stature, but it is a heavyweight in the truck fighting arena. Find out why in today’s blog!

The 2019 Ford Ranger may look little but it has a whole lot of get-up-and-go. A 2.3-liter four-cylinder turbocharged engine that is capable of 270-horsepower hides inside. The engine also puts out 310 pounds-feet of torque. It is aided by the inclusion of  a 10-speed automatic transmission, as well as either 4×2 or 4×4 drivelines. Mark Williams, editor of Cars.com’s sister site PickupTrucks.com, was a big fan of this powertrain. In his larger review, he said the Ranger was quick to respond when he put his foot to the floor.

“Some may think choosing a four-cylinder engine to power a pickup truck (even a smaller one) is a risky move,” Williams said in his First Drive. The smaller engine is no slouch, though. Williams wrote that the turbo four “delivered plenty of motivation in all the configurations we drove; in fact, the only engine with more torque in this segment is the bigger and brawnier turbo-diesel option in the Chevy Colorado and GMC Canyon.” 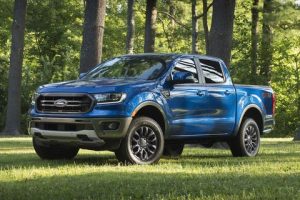 While many consumer trucks guzzle up the gallons in no time, the 2019 Ford Ranger has a more refined palette. At 21 mpg city, 26 mpg highway and 23 mpg combined, the Ranger won’t break the bank when you go to fill up. In fact, that EPA-estimated rating makes it the most fuel efficiency gasoline-fed mid-size pickup truck in the market.

“We ran about 200 miles over freeways and two-lane mountain roads from sea level up above 5,000 feet and we finished our all-day run with a 21.1 mpg average,” said Williams. “Not bad given how enthusiastic we were through the fun parts of the mountain roads.”

The small-but-mighty 2.3-liter four-cylinder turbocharged engine makes the 2019 Ford Ranger a workhorse, despite being one of the smaller trucks on the market. “Of course, we know that most people who buy a mid-size pickup will not tow or haul that often but given that most … are purchased with adventure activities in mind, it’s good to know how they perform just in case they get the call,” Williams said in his review.

The 2019 Ford Ranger holds the honor of the highest maximum tow rating for any gas-fed small pickup, rated for a whopping 7,500 pounds. As for loading up with cargo, Cars.com said that maximum payloads are 1,860 pounds for a SuperCab 4×2 and 1,770 pounds for a SuperCrew 4×2.

The 2019 Ford Ranger handles well despite the added weight. Williams’ test involved a 500- to 600-pound load, and he was impressed by the Ranger’s ride. “The extra weight over the rear axle was almost neutralized by the fairly aggressive Tow/Haul mode.”

Williams added that even with 5,500 pounds in tow, the 2019 Ford Ranger was more than capable. “We found our little four-cylinder engine plenty strong enough to keep its revs up and slot the right gear in the transmission to make short work of the extra weight.”

Ready to take a ride in a new 2019 Ford Ranger? Check out our selection today at Colley Ford!

About the Author: Matthew Holandez