The Ford EcoSport is a subcompact crossover SUV that debuted on the mainstream auto market for the 2018 model year. It has been a member of Ford’s vehicle lineup for the past three years, and an updated model has now debuted for the 2021 model year.

If you’re in the market for a subcompact SUV, you have plenty of options. Subcompact crossover SUVs are currently one of the most popular vehicle classes—or vehicle subclasses—on the auto market. Any driver who is shopping for their next vehicle and wants that vehicle to be a subcompact SUV should consider the Ford EcoSport. Keep reading to learn 3 of the most important things to know about this subcompact SUV’s performance and essential features. 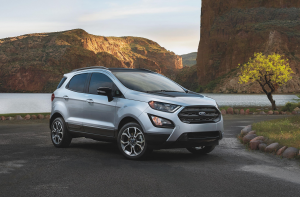 Both of these engines pair with a six-speed automatic transmission and deliver a smooth and quiet ride, agile performance, and excellent acceleration on the road—especially on city streets. The most impressive area of performance for the Ford EcoSport, however, is its towing capacity. This subcompact crossover SUV can tow up to 1400 pounds with its standard three-cylinder engine and up to 2000 pounds when equipped with its more powerful four-cylinder engine.

As an added bonus, all trim levels of the Ford EcoSport—even the base S trim level—are available with all-wheel drive.

Technology is a major contributing factor to the quality and appeal of most modern vehicles. The 2021 Ford EcoSport is equipped with the Sync 3 infotainment system, which is quick, responsive and easy to use. Its standard infotainment features include a 4.2-inch display, a 6-speaker audio system, two USB ports, and a built-in Wi-Fi hotspot.

Infotainment features that are available as optional add-ons for the 2021 EcoSport include a larger 8.0-inch touchscreen display, Android Auto and Apple CarPlay connectivity, a 10-speaker audio system, and a built-in navigation system.

SUVs—which encompass compact, subcompact, full-size, and crossover SUVs—are currently the most popular vehicle class on the mainstream auto market. This means that subcompact crossover SUVs like the Ford EcoSport are in very high demand. Because of the high demand for subcompact SUVs, most of these vehicles don’t come cheap.

This subcompact SUV is a versatile model that is available in four different trim levels: the base S model, the SE model, the Titanium model, and the SES 4WD model. The starting prices for these models are $21,240 for the S model; $24,695 for the SE model; $27,510 for the Titanium model; and $28,820 for the SES 4WD model. These prices are very affordable when compared to the prices of other subcompact crossovers SUV’s within the EcoSport’s vehicle class.

Each of the four Ford EcoSport models comes with different performance features and amenities. The base S model is fairly stripped-down and doesn’t offer much in terms of amenities. Most experts and critics in the auto industry agree that the Ford EcoSport SE model offers the most amenities for the best value. This model comes with a host of add-on amenities, which include heated front seats, automatic climate control, an upgraded infotainment system, a power moonroof, and more.

Check out some EcoSport specials we have in stock!