Skip to content
Home/blog/F-Series, Ford Laugh at the Competition in Latest Earnings
Previous Next

F-Series, Ford Laugh at the Competition in Latest Earnings

Long live the king. Despite increasing competitor efforts to dethrone the F-series, Ford’s market share continues to rise, according to the automaker’s first-quarter earnings report.

Ford is on a hot streak that shows no signs of being put out anytime soon. Ford’s April release of their first-quarter earnings report brought news that the company’s truck lineup made a mockery of the strong efforts to combat it from rival truckmakers. Not content to simply maintain already-strong sales, Ford’s lineup actually increasing in market share and revenue growth, adding insult to injury.

The F-Series pickup line’s unexpectedly strong sales were a major boon for Ford’s quarter, with the iconic truck collection being some of the highest profit margin products for the carmaker. Ford’s progress from last year, with $300 million higher profits, was in large part due to incredible income from the F-Series and other trucks.

Another big winner was the recently-redesigned Ranger pickup. The truck’s strong sales further added to the dominance of Ford’s truck category, alongside good-but-smaller sales of the Explorer and Escape.

SUVs have long been a high-profit margin area for Ford, and they too progressed well in the quarter, furthering the company’s triumphant period.

The Best Defense is a Good Offense

In a report from Yahoo Finance, Ford’s Chief Financial Officer Bob Shanks said that despite greater competition from the company’s rivals, the quarter’s transaction prices for Ford trucks remained near their highest levels ever.

The news is a major blow to the renewed efforts of GM and Fiat to try and rise above Ford’s apparent mastery. Both companies had offered new redesigns of their full-size lines last year in a bid to bounce Ford from the top, but these efforts appear to have faltered horribly, given the F-Series’ continued market share expansion.

Failing to stop Ford’s growth now could spell even more trouble for the future of Ford’s enemies. The truckmaker is planning new additions and upgrades to the already-leading lineup in the near future.

“We are not standing on our laurels, but things look really really good in terms of the strength in the F-Series,” Shanks said. 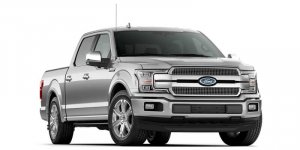 To further fortify the F-Series, Ford is planning the release of an all-new F-150 in 2020. Alongside the redesign will be the truck’s first hybrid offering. On the other end of the workhorse spectrum, a new Super Duty pickup truck is slated to be released sometime this year. The report emphasized the company’s evolving lineup, stating that, “By the end of 2020, Ford will have replaced 75 percent of its current U.S. product lineup.”

To the Victor go the Spoils

The news of Ford’s continued dominance has been a big hit on Wall Street. The automaker’s stocks rose 9% in the hours after the report was released. Traders chasing the lucrative truck business were blown away by the quarter’s adjusted profits of 44 cents a share. With analysts forecasting a far-lower 26 cents a share, Ford crushed expectations.

Stock traders are betting big on Ford’s future success, and so is the automaker. In the release of the financial results, Jim Hackett, Ford’s president, and CEO, celebrated the victory. “With a solid plan in place, we promised 2019 would be a year of action and execution for Ford, and that’s what we delivered in the first quarter. We’re pleased with the progress and the optimism that it brings.”

Hackett also ensured that Ford has no plans to give up the company’s dominance. “Our global team continues to restlessly strive to improve our operational fitness, delight customers with ever-improving vehicles and services, and prepare Ford to win in the future.”

Hackett added that “Our goal remains to become the world’s most trusted company, designing smart vehicles for a smart world.”