Skip to content
Home/blog/How Can Ford Co-Pilot360 Keep Me Safe in Los Angeles Traffic?
Previous Next

How Can Ford Co-Pilot360 Keep Me Safe in Los Angeles Traffic?

Los Angeles drivers are no stranger to horrendous backups and stop-and-go nightmares. Here’s how a car equipped with Ford Co-Pilot360 can help keep you safe in Los Angeles traffic!

We’ve all been there. You’re trying to make a lane change to get to your exit, but there are hundreds of hurrying drivers between you and your goal. Trying to get over can be quite nerve-wracking, especially if you have trouble seeing who or what is in the way.

Blindspots are far less of a hassle thanks to the Blind Spot Information System (BLIS) that is included in Ford Co-Pilot360. BLIS uses sensors to detect vehicles to the rear and sides of your vehicle. When you go to get over and someone else is in your way, BLIS will let you know so you don’t cause a crash.

While L.A. highways often turn into impromptu parking lots, backing out of your space in a real one can be nearly as much of a hassle. Other drivers all too often ignore you as you try and reverse and that can lead to a crash. BLIS also comes with Cross-Traffic Alert to help spot and stop such accidents from ever occurring. You’ll get an alert if someone or something comes too close as you are backing up so you can stop in time. 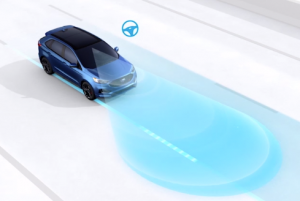 Maybe you were busy biting into a bagel. Perhaps you were distracted by an incoming call. Possibly, that joke your passenger told you was just too funny. One way or another, you’ve made a mistake. Now you’re leaning out of your lane a bit too close for comfort.

With Ford Co-Pilot360’s Lane-Keeping System, your car can let you know when you’re dancing a little too dangerously between the lines. The sensors can detect that your car is coming too close to lane line. You’ll be alerted so you can right yourself and your vehicle. If the problem persists, it can even light up a coffee cup icon. It’ll let you know it might be time to go get a cup of Joe. 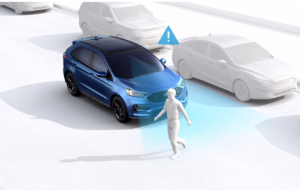 Blindspots are taken care of, and your lane-leaning days are numbered, but safety isn’t just about stopping your own mistakes. Distracted Los Angeles drivers cause one of the highest accident rates in the nation. Don’t let yourself become a statistic.

Ford Co-Pilot360’s Pre-Collision Assist with Automatic Emergency Braking is the perfect aid to help you avoid accidents in the City of Angels. The system can detect potential collisions with things in front of you, be it pedestrians or other cars. You’ll get an alert to let you know it is time to hit the brakes when someone or something gets too close. In the event you don’t slow down in time, the system can even trigger the brakes for you.

We all know that dangers of Los Angeles roads. Now you know how Ford Co-Pilot360 can help keep you safe in Los Angeles traffic. Check out our selection of these super-safe cars today at Colley Ford!