New year, new Explorer. With a new focus on rear-wheel-drive and a redesigned look and feel, the 2020 Ford Explorer is a beast to behold.

With the upcoming release of the 2020 Ford Explorer just around the corner, some big changes are in store. The redesigned Ford Explorer features a new rear-wheel-drive focus augmented by an innovative unibody flexible architecture. This new focus means changes to the look and feel of the Explorer that have granted it power, and praise, like never before. In a review from Forbes, Sam Abuelsamid took the Ford Explorer for a spin and was won over by the changes.

Abuelsamid began his review by talking about the new look of the 2020 Ford Explorer. While it shared many similarities with the Explorers of the past, Abuelsamid noted a few key differences. He noted that, due to the new platform and change to rear-wheel-drive, the Explorer features slightly different proportions this year. Indeed, Abuelsamid said that the new platform, coupled with over a decade of innovations in computer design, made for a more slick and sophisticated design than that of the past.

He also noted that the Explorer has hit the gym, dropping as much as 200 pounds on some configurations. Abuelsamid said that the newly-lengthened wheelbase made for a smoother driving experience, thanks to the 6.5 inch expansion. 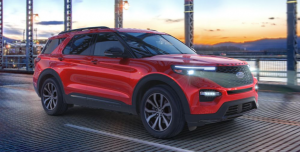 When it came to interior updates, Abuelsamid did notice some major upgrades in the 2020 Ford Explorer. He stated that the inclusions and new-and-improved steels allowed the Explorer’s support structure to be cut down in size. This made for noticeable improvements in hip and shoulder space when seated. The thinner beams and struts also meant that visibility was much improved, cutting down on blindspots at the front corners.
Instruments and storage also received improvements. Abuelsamid felt that the new electronic rotary shift dial cut down on the bulk of the console, freeing up some valuable real estate between the front seats. Some of that space seemed to go to a large storage bin and a 12V socket; two USB ports were also present, one of which is a state-of-the-art Type-C.
Multimedia displays received a refresh as well. Abuelsamid spied a new 10-inch, portrait oriented touchscreen as an option for the ST and standard feature for Platinum. For the XLT and Limited trims, he noted the inclusion of a standard eight-inch touchscreen.

When it comes to powering the new 2020 Ford Explorer, there are engine options aplenty. Abuelsamid said that there are 3 different engines for the gas-only consumer versions of the Explorer. A 300 horsepower 2.3-liter EcoBoost 4-cylinder starts out the list as the standard engine. A 3.0-liter twin-turbo EcoBoost V6 powers the Platinum and ST trims, coming with 365 horsepower for the Platinum and 400 horsepower for the ST. Abuelsamid noted that all 3 of these engines are supported by the new 10-speed automatic transmission that Ford is rolling out to many of their rear-wheel-drive vehicles, and it will also be present in the new hybrid powertrain.

Yes, you read that right: the 2020 Ford Explorer will now have a hybrid option. It will use the a 3.3-liter V6 tuned for an Atkinson cycle, which Abuelsamid said was part of Ford’s new modular hybrid system. It will be capable of 318 horsepower and 322 pound-feet of torque, crushing competition from the Toyota Highlander and Acura MDX. 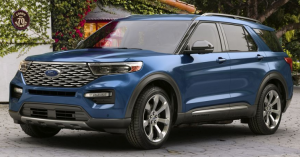 Towing trailers is one of the best reasons to get a 2020 Ford Explorer. Abuelsamid said that the four-cylinder turbo engine will provide 5,300 pounds of towing capacity, with 5,600 pounds from the EcoBoost V6. While the hybrid won’t be quite so capable, the 5,000 pound tow rating skyrockets over similar hybrids. As Abuelsamid noted, the 2019 Highlander hybrid manages a measly 3,500 pounds and MDX owners are warned not to tow at all.

Abuelsamid lavished much praise on the 2020 Ford Explorer. On towing with the hybrid engine, he said that “accelerating a Hybrid Explorer pulling nearly its own weight in boat felt pretty effortless.” On driving without a trailer, Abuelsamid said that the 2020 edition “feels more lively and nimble than past iterations.” He also found the Explorer to be a blast to drive. “Both the four-cylinder and hybrid are surprisingly fun to drive along twisting two-lane roads climbing up and descending back down to near water level.”

Abuelsamid particularly enjoyed the hybrid option. He said that the feel of the hybrid was “among the smoothest I’ve driven with no obvious indications of the engine cycling on or off.” He also praised the create noise isolation and suppression of the Explorer. “Unlike the smaller Cadillac XT4 which seems awash in engine and road noise, the Explorer was remarkably serene even during hard acceleration.”

As a whole, the 2020 Ford Explorer was a big hit with Abuelsamid. “Overall, the Explorer is an excellent place to spend time …The 2020 Explorer is much improved over the aged last generation … Anyone looking for a three-row utility should definitely have it on their list.”

If you’re ready to buy a new Ford Explorer, check out our selection at Colley Ford!