August 11, 2020, marked 55 years since the original Ford Bronco hit the mainstream auto market way back in 1965. 2020 has been a big year for the Bronco because this has been the year in which Ford officially announced and finally unveiled the brand-new Ford Bronco SUV that will rejoin Ford’s vehicle lineup for the 2021 model year. This, of course, calls for a celebration. Here’s how Ford celebrates Bronco Day.

The classic Bronco has been renowned for decades as one of the most beloved models in Ford’s lineup, so it came as no surprise that the announcement and unveiling of an all-new Bronco model would generate a lot of hype among Ford drivers and fans around the world. The 2021 Bronco has yet to be released on the mainstream auto market, but 165,000 drivers have already paid a fee of $100 to reserve their very own Broncos—which will be delivered after the SUV’s official release for the 2021 model year.

If you’re intrigued by the idea of Bronco Day and want to learn more about this momentous celebration and the exciting announcements and reveals that Ford saved for this day, here are 3 things you should know about how Ford rejoiced in celebration for the 55th birthday of the beloved classic Ford Bronco.

To generate more excitement about the all-new Bronco, Ford showed off 5 different customized and accessorized 2021 Bronco models in honor of Bronco Day on August 11. These personalized Bronco SUV models served as tantalizing inspiration for many soon-to-be 2021 Bronco owners. These 5 modified Bronco models all showcased different available features and abilities of the all-new Bronco and were accessorized as well for added performance.

Last but not least, Ford unveiled the Bronco Sport Off-Roadeo Adventure Patrol. This personalized Bronco model was emblazoned with the words “SUPPORT TRUCK” and

was designed to give viewers a glimpse of what the crew vehicles that will provide support at Ford’s Off-Roadeo adventure parks will look like.

Soon before unveiling the Ford Bronco, Ford announced that it would be opening four off-road parks—which would be called “Off-Roadeos”. Ford revealed that these Off-Roadeos will be outdoor adventure playgrounds that are designed to accommodate and safely entertain drivers of all skill levels while immersing them “into the Bronco lifestyle”.

It seems that Ford’s four Off-Roadeos will offer Bronco drivers the opportunity to enjoy their Bronco in all of its glory in an outdoor space that is set up specifically for safe and exciting off-roading. However, official information about the upcoming Off-Roadeos is still lacking. Many Bronco fans have been eager for additional updates since Ford made their official announcement of their plans for these off-roading adventure playgrounds.

In honor of Bronco Day, Ford chose August 11 to announce the location of one of its four upcoming Off-Roadeo parks. The first revealed location is Austin, Texas. If Austin is far from you, don’t lose hope yet. Stay tuned for upcoming announcements from Ford about the location of the other 3 Off-Roadeos, as the locations of 3 of the 4 off-roading parks have yet to be revealed.

In 2019, a prototype of the Bronco R model participated in the prestigious Baja 1000 off-roading race. Unfortunately, the Bronco failed to successfully cross the finish line of this 34-hour race. 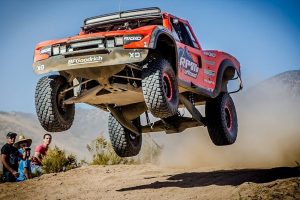 The Ford Bronco is back at the Baja-1000 in November

This failure was a result of several factors, including lack of training for the team behind the Bronco truck, an uncommonly muddy track due to heavy rains, and a mid-way break of the truck’s lower control arm. Plus, a Trophy Truck that was also competing in the race actually rolled over on the track and landed on the Bronco R midway through the race, which understandably delayed the Bronco truck for several hours.

On Bronco Day, Ford announced that the Bronco R truck will return to the Baja 1000 race this year in 2020. Keep your eye out for the Bronco’s performance in this off-roading race this November.