Skip to content
Home/Mustang/It’s a Hit: 2021 Mustang in Los Angeles
Previous Next

The release of the 2021 Mustang has been long-awaited on the mainstream auto market. Originally debuted in 1964 for the 1965 model year, the Ford Mustang ranks very high on the list of the vehicle models that have been on the market for the longest period of time. 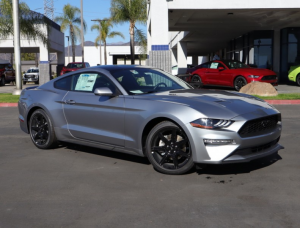 This high-performing, athletic pony car has become somewhat of a legend among classic car collectors and everyday drivers alike. The fact that the Mustang has been on the market since the mid-1960s without ever missing a year of production serves as a strong testament to the quality of the Mustang models that Ford designs and distributes worldwide on the mainstream auto market.

The release of the 2021 Mustang is special because it features a revival of the legendary Ford Mustang Mach 1. The Mach 1 model debuted for the Mustang in the 1969 model year and is characterized by its power as well as its dynamic and engaging performance on the road. The original Mustang Mach 1 was a top seller on the auto market—even when its sales figures were compared only with those of other Mustang models. It is a versatile model that brings in the best features of many other Mustang models and ties them up neatly into a stylish, high-performing package.

Unfortunately, the beloved Mach 1 model was discontinued after the 2004 model year—much to the dismay of many drivers who enjoyed the versatility and unique, driver-focused design of the Mach 1.

The 2021 Mustang debuted in June of 2020, but it hasn’t yet hit the mainstream auto market—although that day is soon to come. Production of the 2020 Mustang models is scheduled to end in late December of 2020, and production of the long-awaited 2021 Mach 1 pony car will start on January 4 of 2021.

All 2021 Mustang models are expected to officially hit the mainstream auto market and become available for purchase at your local auto dealership sometime in early 2021, although pre-orders for the 2021 Mustang have been open since mid-October.

If you’re located in Los Angeles or somewhere within the Greater Los Angeles County area, you don’t have to wait too much longer to get your hands on a 2021 Mustang model—whether you want to opt for the Mach 1 or a different model.

Mustang sales are reliably high in Los Angeles, so auto dealerships in and around L.A. tend to have the latest and greatest vehicle models available for purchase sooner than some dealerships in other areas.

Most Notable Features of the 2021 Mustang Mach 1

So what is it about the 2021 Ford Mustang Mach 1 that has so many drivers so excited to get their hands on this all-new model? Part of the excitement about the upcoming release of the 2021 Mach 1 model has to do with the novelty of the Mach 1 in and of itself since this particular Mustang model has not graced the market since 2004.

However, there are also many notable features of the 2021 Mustang Mach 1 that make this all-new, versatile pony car an excellent vehicle option for many drivers.

The 2021 Mustang Mach 1 is a limited-edition model that will feature a 5.0-L V8 engine that delivers 480 horsepower on the road and pairs with a six-speed manual or 10-speed automatic transmission. Its impressive aerodynamics and upgraded performance hardware help boost the athleticism of this pony car on the road.

For the 2021 model year, Ford’s limited-edition Mustang Mach 1 is also available with a Handling package. This package only pairs with a manual transmission and includes stylish add-ons—such as an exclusive swing rear spoiler and 11-inch aluminum wheels wrapped in sporty tires—that give the Mach 1 a bolder appearance on the road without taking away from its classic look.

Contact Colley Ford for more info and any specials on the Mustang in Los Angeles areas!