The History of the Ford F-150 Series

The popularity of Ford F-series is undoubtedly something iconic. It’s no doubt that maybe you have come across some of the Ford F-series pickups on your streets. It’s now clear that every kingdom has a ruler and a dominant force and in the world of Ford vehicles, the F-series has been the dominant influence over time. In the world of Pickups, it’s the dominating machine that has earned its reputation over the years. This vehicle, since its invention about a century ago, has taken the US by storm. It has also topped the list of the best-selling vehicles for more than two decades.
It’s no understatement to call the Ford F-series America’s favorite pickup because most pickup lovers in the country own one. The model has accumulated a total of 33,000,000 units sold since its introduction in 1948 to date. Let’s talk about the grand story of a humble utility machine which had been put forth by generations of Americans since WWII. It has since then risen to be a cultural icon in the country and several other parts of the world.
Since its invention in 1948, the vehicle has gained its popularity and maintained its stellar reputation due to a couple of innovative features and its rugged value. The machine was the first to adopt the industry’s first aluminum bodywork. They have also adopted smaller and turbocharged engines.

This machine was introduced in the United States in 1948. At this time, they were known as the Ford Bonus-Built trucks. However, Ford saw its first model introduced in 1917 which was named the Ford Model TT. By this time, it was considered the best and the most usable truck of the era. It had a cargo capacity of one ton.

The first Ford F-series generation was between 1948 and 1952. By this time, the series carried the designation of F-1 through F-8. These trucks were also rated by weight as panel trucks, school buses, cab-over-engine, and conventional trucks. They were fitted with manual transmissions. They also featured a passenger and a driver side windshield wiper. Taking into account the technology by this time, this was really high tech. It was also a big accomplishment for the manufacturer.
The 1948 F-series was the first post-war Ford series which was designed and released a year after the war. During the war, the Ford founder Henry Ford shut down the production of other models to concentrate on manufacturing those that could support the troops and allies. After the end of the war, the F-series and the veterans were the first to be recognized. The 1948 F-series replaced the streamlined look that was with other prior models. The models also boosted an interior that was billed and tough-looking grille.

This is the time when a complete redesign of the F-series was brought forward. The vehicles received new engines, bigger interiors, updated chassis and other options such as radio, arm rests, and eventually the lighter. They also introduced the dome light and a significant name change. During the second generation, the F-series changed. The F-1 changed and was recognized as the F-100 and the F-2 and F-3 were merged to become F-250. Additionally, the F-4 became F-350. They remain in place up to now. F-100 in 1953 got the nickname ’power king’ after the flathead engine was replaced by a new 239 CIV overhead valve Y-block V-8. A few months later, power steering was introduced as an option. In 1956, a special F-100 was designed. It featured a wraparound windshields and also offered vertical windshield pillars. 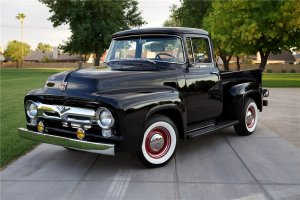 This is the time when almost every dimension of the F-series changed introducing a new and modernized body style. By this time, the front fenders of the previous versions became part of the body. Tilt-cab C came to replace the cab-over F-series. In 1959, the company started the production of the four-wheel drive which was a milestone by the time.

A new style emerged and the look of the machine was noticeably different. The Twin-Beam Front suspension was introduced in 1965 and it became a big change. It also remained as the part of F-150 up to 1996. It also remained as part of F-250 and F-350 up to 2016. The main thing that this did was to allow the front wheels to run independently. This gave the truck greater maneuverability which made the ride smoother.
The manufacturer introduced more style and functionality in the 5th generation. It became very easy for truck drivers to choose from three trims: base, custom, and ranger.
A powerhouse sixth generation came in between 1973 and 1979 where there were a number of improvements. It was the time when the supercab was introduced. The seventh generation comes with a number of improvements as well. The one F-100n and F-250 came in and bridged the gap. According to statistics, about half of the F-series sales were made at this time.
Enter the eighth generation where wraparound parking lights and standard fuel injections were introduced. There was also the introduction of new super duty lines such as F-350. After 1991, truck users got performance and styling in place. The 9th generation of the F-series made its debut in 1992 where special vehicles teams introduced advanced trucks. They also got major cosmetic upgrades at this point in time with the designers looking to make the truck even more good looking.

Ford F-series in the 21st Century

In 2004, there was an introduction of an all-new platform and the super duty trucks were introduced in 2008. The designers looked for greater comfort in the vehicles. There were several improvements all the way through to 2018.

The 2018 F-150 entered the scene a century after the introduction of the Ford trucks. The 2018 F-150 has some of the best features such as collision protection technology. It is now one of the best and the most economical upgrades in the market. I am sure that Ford has done all that it takes to close a century of work in style.