The Ford Mustang is an iconic, enduring American pony car that is unarguably one of the most recognizable cars in the entire world. Ford initially released the first Mustang model in 1964, and the debut of this fresh sporty coupe was met with almost immediate widespread success and popularity across the world. Since its original debut more than 50 years ago, the Ford Mustang has remained one of the top-selling cars on the mainstream automotive market. It is currently in its 6th generation, which began in 2015, and continues to reign as the number-one best-selling sports coupe worldwide.

Interestingly, the Ford Mustang has played a major role in popular culture over the decades since it initially debuted on the mainstream automotive market. Ford released the Mustang in the middle of the 1960s, which coincided with the peak of the Golden Age in Hollywood. The sleek, sporty design of the Mustang fit right in with the glitz and glam of Hollywood during the 1960s, so it quickly became a popular car choice for movie stars and celebrities. Mustangs quickly rose to celebrity status themselves in the 1960s and were featured in many iconic movies during the 1960s, 1970s, and beyond. To date, the Ford Mustang has accrued more than 500 film credits since its first appearance on the silver screen in The Troops of St. Tropez in 1964.

Most Iconic Films with a Ford Mustang

The Troops of St. Tropez marked the official debut of the Ford Mustang on the silver screen. A 1964 Ford Mustang model appeared in this well-known French comedy, which became the most popular movie at the French box office in 1964 and was subsequently released and rose to popularity in the U.S.

Actress Genevieve Grad, who starred in The Troops of St. Tropez as character Nicole Cruchot, is credited as the first person to drive a Ford Mustang in a feature film.

In 1971, James Bond (portrayed by renowned actor Sean Connery) drove across the silver screen in a 1971 Mustang Mach 1 in Diamonds are Forever.

However, Diamonds are Forever is not the only James Bond movie that has featured a Mustang. The 1964 classic James Bond feature film Goldfinger also includes an appearance of a Ford Mustang. In this movie, actress Tania Mallet as character Tilly Masterson is at the wheel of a 1964 Ford Mustang, which subsequently gets its tires slashed by James Bond himself later on in the movie.

Farrah Fawcett is one of the most iconic celebrities in Hollywood, and she drove a 1976 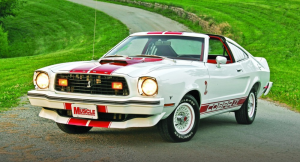 A Ford Mustang appeared in the iconic 1989 sequel Back to the Future Part II as a “futuristic” car that was supposed to be from 2015.

This Mustang, which looked very similar to real Mustang models that were popular in the 1980s, showed up on screen with the addition of a huge spoiler in the back. This design change was implemented to differentiate this Mustang model (which was supposed to be from the then-futuristic and imagined world of 2015) from Mustang models that already existed in the late 1980s at the time when the movie was released.

5. 2 Fast 2 Furious (2003)
The Fast and the Furious is an iconic movie series that is centered around cars and illegal street racing in said cars.

Various Ford Mustang models have been featured in several of The Fast and the Furious films. One of these features is the appearance–and subsequent destruction–of a 2003 Mustang Saleen S281SC in an exciting action-packed street racing scene in 2 Fast 2 Furious (2003).