In April of 2018, automotive giant Ford Motor Co. made the surprising announcement that they had decided to phase out the vast majority of their car models in North America. Ford notified customers and the media that they would only be continuing to produce and sell one of their traditional car models on the North American market—the Mustang. Among the well-known car models that Ford has chosen to phase out of production are the Ford Focus, the Ford Fusion, the Ford Fiesta, the Ford Taurus, and the Ford C-MAX. With the resources they previously allocated to their sedans, Ford plans to instead focus on developing and improving their line-up of trucks and SUVs.

This decision may seem extreme, but it does make logical financial sense. Ford experienced a sharp drop-off of almost 15% in sales of their sedans between 2017 and 2018 alone. In 2018, approximately 90% of Ford sales in North America were sales of trucks, utility vehicles, and commercial vehicles. This statistic means that sales of traditional car models accounted for only about 10% of the auto giant’s sales, which is definitely not sustainable considering the resources Ford was funneling into production and marketing of their sedans prior to their 2018 decision to phase them out of their vehicle lineup.

What Does Phase Out Mean?

Ford’s phase-out represents a major shift for the automotive brand but it does not mean that all Ford sedans will suddenly disappear from the market. Phasing out so many car models, all of which have played key roles in Ford’s success, is a long process. 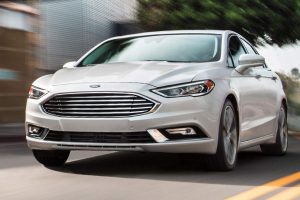 Currently, Ford still lists the 2019 Ford Fiesta, the 2020 Ford Fusion, and the 2020 Mustang on their official website. The C-MAX, Taurus, and Focus have already been officially phased out, which means that they are no longer being produced for the North American market and no new models of these cars will be released in North America. The Ford Fiesta and the Ford Fusion are expected to follow in the footsteps of these phased-out cars in the near future, but the Mustang is expected to remain on the market according to the plans Ford has made public.

Should You Still Buy a Used Ford?

A major question on many consumers’ minds is whether or not it is still worth it to purchase a used model of one of the traditional sedans that Ford has chosen to phase out of their vehicle line-up.

The short answer to whether or not you should still buy a used Ford even as they are in the process of being phased out is yes. Traditional Ford car models are still being produced in many parts of the world—just not for the North American market.

The worst case scenario is that you purchase a used Ford sedan that is phased-out and somewhere down the line are unable to get parts for it from Ford—which is unlikely. Even in this unlikely scenario, though, you will still be able to get the parts you need pretty easily as many aftermarket parts makers will still offer parts for Ford vehicles indefinitely.

To put it simply, there’s not much to worry about in terms of buying a used version of a Ford car that has been phased out or that is expected to be phased out of the North American market in the near future. You shouldn’t have any problems getting access to any necessary parts, repairs, and maintenance services on a used Ford car, even if the car is no longer officially available on the North American market.

About the Author: Matthew Holandez