What to Know About the Ford Hybrid Truck

Multinational automaker Ford has been a household name on the global mainstream auto market since the company was founded more than a century ago. Ford mass-produces and distributes vehicles of all shapes and sizes, but this multinational automaker is best-known for its trucks—especially their F-series models. Ford’s F-series is a lineup of full-size Ford pickup trucks that have been in production since 1948 and is currently in its 13th generation. The Ford F-series trucks, which include the iconic Ford F-150 model, are known for their high performance, capability, and reliability. Is there really a Ford hybrid truck on the way?

As trends and consumer demands on the mainstream auto market as a whole shift toward a focus on alternative fuel sources—like electric power—in place of or in addition to gas engines in cars, many consumers and experts have wondered how Ford—which is known as a powerful truck-focused brand—will respond to these shifts in consumer interests and demands in order to remain relevant.

Ford’s F-series lineup features several different trucks, including a selection of heavy-duty F-series models. The first F-series model to make its hybrid and all-electric debut on the mainstream auto market will be the Ford F-150. 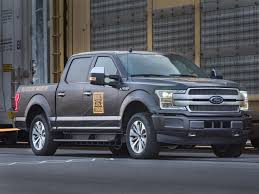 A hybrid version of the Ford F-150 is expected to hit the mainstream auto market sometime in 2020 for the 2021 model year—and an all-electric model is projected to be released sometime soon after the hybrid F-150’s launch. Upcoming mass production of these fuel-efficient versions of the F-150 has been confirmed by Ford’s major production plants in Michigan. Since the hybrid F-150’s release is set for later this year, there’s no doubt that more details about this model and its specs will be released very soon.

No official specs have been released thus far for the hybrid and all-electric F-series models. Obviously, they will be much more fuel-efficient than the current gas-powered F-series models—but that’s not all. One thing Ford has spoken on regarding the hybrid and all-electric F-series trucks is the lower center of gravity that the trucks in this new fuel-efficient truck lineup will have.

3. Ford is Making a Comeback

Ford’s sales have been slipping over the last few years—not because of any issues with the quality of the vehicles Ford produces, but because Ford’s focus has traditionally been on producing powerful trucks regardless of fuel efficiency. That focus no longer matches the focus of consumers, which is drifting toward smaller, more fuel-efficient vehicles.

Since they announced their plans to phase the vast majority of their passenger sedans out of mass production in 2018, however, Ford has shown a renewed commitment to keep up with the times and trends in the modern auto industry. They have invested billions of dollars into their design and production of hybrid and all-electric trucks and have created close to 3,000 new jobs to fulfill their plans to reduce the carbon emissions of their trucks.

The upcoming release of the hybrid and all-electric F-150 is exciting, but what’s even more exciting is Ford’s dedication to investing the necessary resources to make their big-picture fuel-efficient plans a reality—which implies that consumers can look forward to Ford releasing many more all-new hybrid and all-electric vehicles in the very near future.