Skip to content
Home/blog, Ford, tips/What’s New with the Ford EcoSport?
Previous Next

What’s New with the Ford EcoSport?

The Ford EcoSport is a subcompact crossover SUV that is produced and
mass-distributed internationally by iconic American multinational automaker Ford Motor
Company. While it has been produced in several countries around the world since 2003,
the EcoSport hit the mainstream auto market for the first time in North America in 2018.
Since the EcoSport is a fairly new addition to Ford’s vehicle lineup in North America,
many drivers aren’t sure what to expect from this subcompact SUV. It has gained
significant attention on the mainstream auto market since its release, especially since
Ford announced their plan to discontinue selling the majority of their sedans by the end
of 2019 in favor of strengthening their focus on the SUVs in their lineup.

The Ford EcoSport is a trendy subcompact crossover SUV that exceeds expectations in
its vehicle class and is a practical car for families and commuters. The 2020 EcoSport is
available in four different trim levels: the EcoSport S base model, the EcoSport SE, the
EcoSport Titanium, and the EcoSport SES. It is in line with the SUV-centered trend on
the current auto market, but its subcompact size allows it to be more affordable for
drivers on a budget. The base model of the 2020 EcoSport has a low starting price of
$19,995 and the high-end, luxurious 2020 EcoSport SES—which is the most expensive
EcoSport trim level for 2020—has a starting price of just $27,380.

All three lower trim levels of the 2020 Ford EcoSport come with the same standard base
engine—a 1.0-L EcoBoost engine that is equipped with built-in Auto Start-Stop
Technology—and are available with a second engine option—a 2.0-L Ti-VCT I-4 engine
with the same Auto Start-Stop Technology. The high-end EcoSport SES bypasses the
1.0-L EcoBoost altogether and comes standard with the 2.0-L I-4 engine. All-wheel drive
is also available for all trim levels to offer a smoother, more enjoyable ride for drivers
and passengers alike.

If you’re in the market for a Ford EcoSport, check out the top 3 features of the 2020
EcoSport—including some features that are completely brand new for the 2020 model. 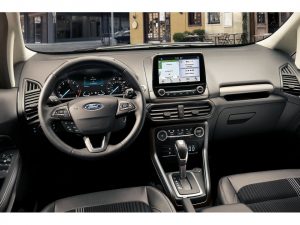 The most notable features of the Ford EcoSport that are brand new for 2020 are
tech-related. Every 2020 EcoSport model is equipped with a built-in Sync or Sync 3
infotainment system that is easy to use and includes all of the standard high-tech
features that are expected for modern in-car infotainment systems.

What’s new for 2020 is a 4G LTE Wi-Fi hotspot that now comes standard in all Ford
EcoSport models. An 8-inch touchscreen that comes as a standard feature built into the
EcoSport SE models—in addition to the EcoSport’s two higher trim levels—is also new
for 2020 as part of this SUV’s state-of-the-art infotainment interface.

One of the main selling points of any SUV is its spacious interior, but the amount of
cargo space available in subcompact SUVs like the Ford EcoSport is often
disappointingly low. This problem leaves many drivers stuck choosing between having
to pay more upfront for a mid- or full-size SUV in order to secure more cargo space or
sacrifice cargo space to pay less for a smaller SUV.

The Ford EcoSport, however, doesn’t force you to choose between a more affordable
SUV and a high amount of cargo space. This subcompact SUV offers above-average
cargo space within its vehicle class. In addition to its abundant cargo space, the
EcoSport’s spacious cabin also offers plenty of room for passengers—even when a
good amount of cargo is onboard this SUV at the same time.

In addition to its user-friendly, cutting-edge infotainment system, the 2020 Ford
EcoSport also comes with an impressive host of advanced safety and driver-assist
technology features that help make drivers’ and passengers’ time on the road safer,
less stressful, and more enjoyable.

All Ford EcoSport models are equipped with Ford Co-Pilot 360 Technology, which
includes several driver-assist features. Hill Start Assist and a rearview camera come
standard in all 2020 EcoSport models, and additional features are standard or available
as optional add-ons for higher trim levels.